My great grandfather, Max Rosenberg, was a porcelain and glassware designer/manufacturer in a small city in the Austro-Hungarian empire. It’s a part of the world that truly marks the intersection of east and west, whose boundaries and borders were challenged, fought over, and changed hands countless times. When he came of age my grandfather Josef made his way to the much larger city of Vienna, Austria to sell his father’s wares. This business expanded into providing large kitchen hardware. Family lore includes a story about someone bringing the first espresso machine into Vienna. His showroom was on one of the largest avenues leading out of the city centre. In early spring 1938 with dark winds blowing across the continent, my grandmother had an intuition, and said ‘we must leave now!’. They packed up what they could carry, including sticking gems into toothpaste tubes, and caught what turned out to be the last train out of Vienna. The next day Hitler marched into town.

Fast forward to the mid 2010s. After my parents died I dug further into our histories including trying to find out more about great grandfather Max and his porcelain. Gratefully the Jewish diaspora has created prodigious collections of information which grows by the year. I found one account that mentioned Max by name, just a sentence, that he created “fine porzellan and glassenwar” in Przemysl which is now Poland. I can’t tell you how many years it took just to find Przemysl on a map much less anything else. Slowly as I was able to piece bit by bit of information together, finally I got a lead on an antiques site that deals solely in porcelain and ceramics. Someone had posted about an unusual fish dish with the mark of Max Rosenberg from Poland. I knew this must be my Max. I tried to contact the person who initiated the post which was already a few years old, and learned from others on the forum this person apparently had disappeared and hadn’t been active there for some time. This was a dead end. 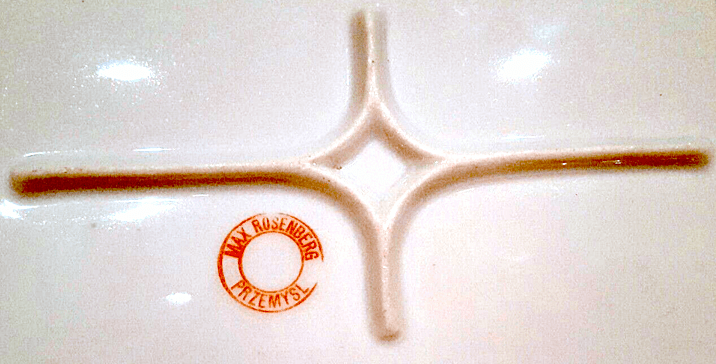 Back of Fish Dish with Max’s Logo 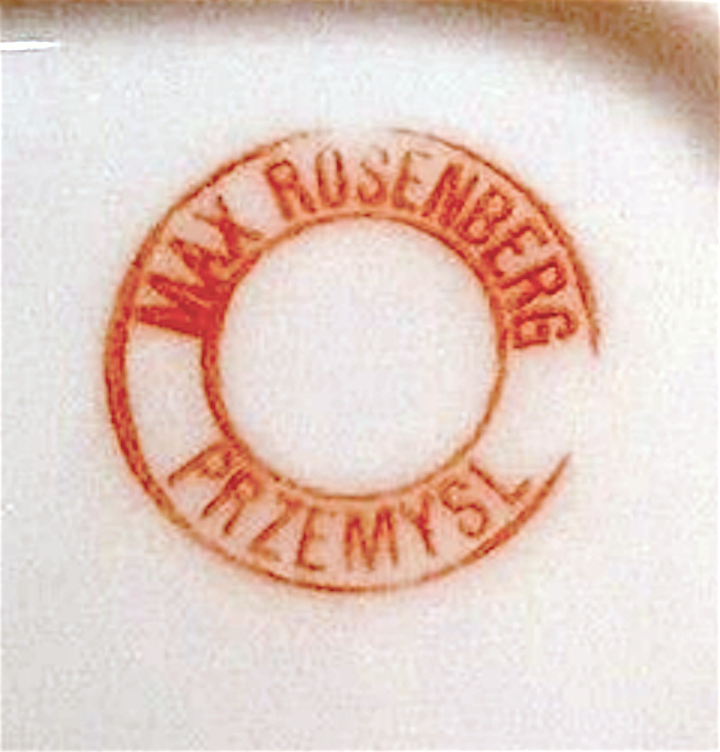 Every once in a while I would search again, ending up learning about porcelain of the time, including finding a very large Dutch Rozenberg company of the same era that made magnificent Art Nouveau designs, but was no relation. So lo and behold, about a year ago I just make another such search, this time on eBay and bingo, the fish dish comes up. The seller, who lives in southeast Tennessee found it in a small antiques shop and thought the quality was good. I told her my story and she was just thrilled that I was so thrilled to find it. So it sits now, safely in my studio.

As you can see, Max’s logo is there bright as day on the back of his beautiful dish. When it came time for me to design something for myself, I couldn’t think of a more apt tribute to this side of the family then to replicate Max’s logo.