All other shows have been cancelled.

Lots of shows all year:
(Note: All shows from 2017 onward are juried, save for those at Spilsbury Gallery, and Arts Club Member Shows.)

I spent 20 years as a co-owner of one of the top post-production houses in the Washington area. For fifteen of those years I was also a colorist working on probably hundreds of projects of varying lengths and genres. Having grown up in a film family I did various jobs in production particularly after college for a couple of years before going into post. I produced and/or directed a few small projects during that time, and left the business in 1999 to pursue the inner art of meditation.

I got my first formal training in asana, pranayama and meditation after college, and then more later in the mid-late 90s. I co-owned and taught in a local studio and also freelanced in different states, and later in Asia while transitioning away from film for a while.

When I started studying more in depth about meditation (after being introduced as a teenager by my swami) I was drawn to the Tibetan tradition rather than the Advaita Vedanta of my yoga lineage (although they both cite the realization of non-duality as a fundament). Once I eventually got connected to a local center and practiced over the years, that resulted into my eventual departure from Washington 20+ years later to study and practice full time. I first went to Colorado for three years and from there travelled to Asia, Europe, and Canada attending teachings, and doing group and solo retreats. I moved back to the Washington area in 2008 and continued to practice – sometimes with others, but mostly on my own.

A long interest in framing found me In the mid 2010s taking a couple of workshops at the renowned Gold Leaf Studios in Washington with Bill Adair. I’ve been able to apply some of what I learned in my work, with frames and also in paintings. 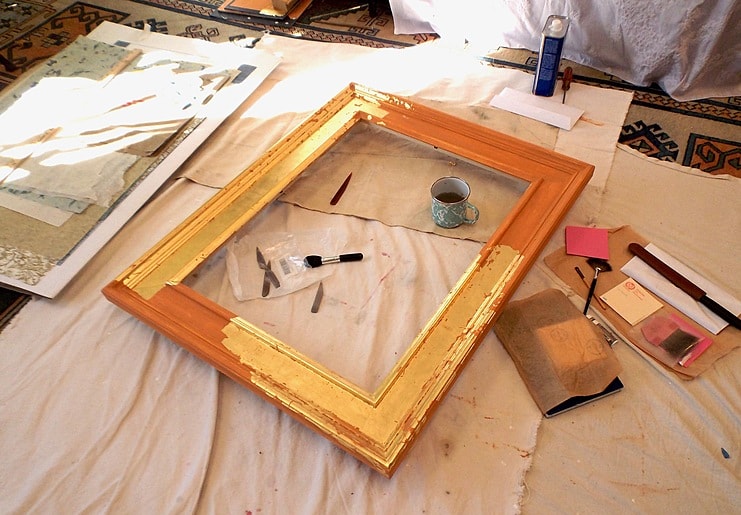